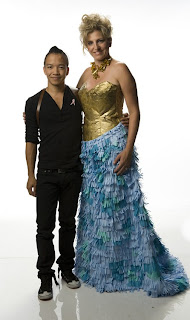 Well this is your lucky week.

This week’s episode of Project Runway:Canada (which is soooooo much better than it’s american gay brother), featured the designers making dressers for cancer survivors made out of Post-It Notes!

The results offered some highs: Jenny! Sunny!
And some disastrous lows: Adejoke! Jason!

But the cool thing about this week project was that you can now go online and bid on all the dresses and that money will go directly to Canadian Breast Cancer Foundation!

Only thing cooler than that is the fact that hardly anyone has bid on the dresses, so most of them are still at their original asking price of $100!!! Isn’t prom right around the corner? How about that bridesmaid dress your still struggling to find? And in the case of Jason Meyer’s dress, maybe you want to buy a dress for someone you really hate more than anyone in the world.

Well now is your chance!