Popular for the wrong reasons! 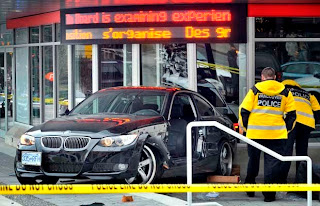 CBC just got a bunch of free exposure!

On Tuesday morning, a car was
carjacked, put into reverse, backed through an intersection and slammed into the newly renovated CBC Television studio in Vancouver.
I hate to be too cynical, but CBC does have a bunch of new shows debuting this week, so this would be an excellent way to get some free publicity! I can see the news report now: “A car crashed into a CBC building and the man will be serving 18-years to life, speaking of 18-Years-To-Life, that is also the name of new show!” 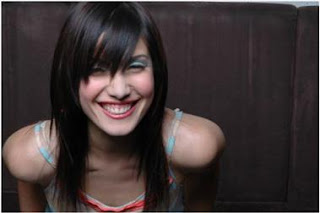 The accident is also garnering headlines since it involved the Canadian actress Carly Pope (from the WB’s Popular) and her brother. Apparently while Carly was still in the back seat, the hijacker jumped on the hood of the car, Carly’s brother got out, the car-jacker jumped in and took control of the vehicle. The accident was so bad that Carly is still in the hospital. Her brother was also injured, but he has since been released!
Of all the questions that remain, the one that is sticking with me is this: Why was Carly Pope sitting in the backside while her brother drove? I thought I was the only one that did that?!