>So by now you’ve all heard the rumor that Leann Rimes has been hooking up with the equally married Eddie Cibrian after meeting on the set of the made for tv Northern Lights.

But here is something that maybe you didn’t know, did you know that Northern Lights was actually filmed in Calgary?! It’s true, it was. Doesn’t your life feel different now?

Obviously this is going to cause a rift between Rimes and her husband Dean Sheremet who have often faced a lot of criticism due to the fact that many think that Dean is…well…I hate to spread rumors…but….um…Let’s just say that Leann has a shit poor gay-dar.

Well I have a little bit of an exclusive because when Leann was in town filming the movie, I had a chance to catch up with her and her husband and here is what I happened to overhear. 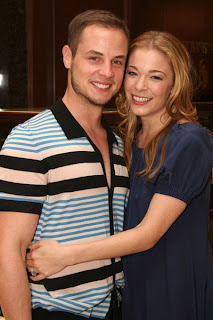 leann: really you are going to wear that sweater?
beard: yeah, it’s totally straight.
leann: what?
beard: I mean I’m totally straight. So is the sweater. See the lines on it? They totally straight too.
leann: I think I screwed up.
beard: no, so see the lower and more open the sweater, the straighter and manlier I am.
leann: oh god, I really screwed up.
beard: i can grow a beard if you want. I’ve waxed my face so we have to wait a while, but a beard is totally possible.
leann: fuck, where is that guy from coyote ugly.

I guess we all should have seen it then.