I feel bad for Bo Bice, you remember him he was the one that faced off against Carrie Underwood in the American Idol 4 finale. Oh come on, yes you do, he had long hair, he was the rocker guy….maybe a picture will help. 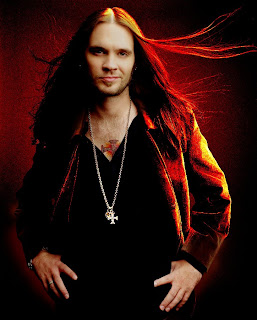 There you go.
Well I feel bad for him, initially I felt bad for the kid because his first album was comletely over-shadowed by Underwood’s debut CD Some Hearts, which is still charting, even thought it has been out since November 15th 2005. That is almost two years ago which is pretty much unheard for a country CD, let alone for an artist that won a reality show.It didn’t help that Bo’s album came out only 4 weeks after Carrie’s either. Right now their total album’s totals stand at 5,960,506 for Carrie (8 million worldwide) and a measly 688,000 for Little Bo Bice
It’s no secret that Carrie Underwood won the post-Idol battle royale. But it has been two years since Bo and Carrie faced off, lets all move on right? Wrong.
On Tuesday both artist’s sophmore CDs will be released and poor ol’ Bo will be forced to take on that country whore one more time. Bo’s CD (See the Light) and Carrie’s (Carnival) are both available for a full album listen at AOL Music for this week only.
I’ve taken the opportunity today to listen to both CDs and I’m happy to say that Bo’s CD is actually not that bad. It makes for great work music after listening to Underwood’s sappy country tunes. The problem with Bo is that his voice isn’t very memorable. It does not have that distictive tone like Underwood’s so there isn’t really a point to listening to his music, because anyone could be singing it as far as I am concerned. (Although sometimes he does kinda sound like Springsteen)
It will be interesting to see the number’s next Wednesday (October 31st) for record sales for Carrie and Bo’s debut week. Last time Carrie had the highest debut ever for a new country artist. Bo actually did OK with a #3 place entry, I’d be suprised/shocked if he made it to the Top 20.