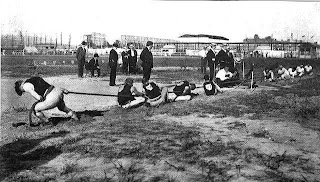 Like every other human being on earth I have been watching the Olympics like crazy lately. Unlike the rest of the world I seem to be more than confused than impressed.

Over the last couple of nights I have making a list of questions, comments and concerns pertaining to all things Olympics.

* In researching my questions (yes, I do research), I found out that quite a few sports of been cut from the Summer Olympics, and they aren’t ones that you would necessarily expect. They include: golf, croquet, cricket and sadly Tug of War (see above picture)! Luckily hockey and figure skating were moved from the Summer games to the more ideal Winter games in 1920.