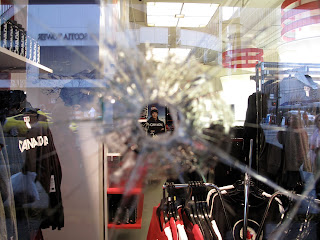 Easily one of the weirdest parts about being at the Olympics, is how unattached I actually feel from the Olympics. When you are home, you are sitting on the couch, you have about twenty stations covering everything that is going on in the city. Whether it be the medals, celebrations or protests.

But when you are out of your house all day and on the streets, it is hard to keep up with everything that is going on. Twitter has definitely helped. For those of you who haven’t hoped on the Twitter-train yet, I’m pretty sure it was invented for things like the Olympics.
One of the stories that I’m sure is being covered or not is the protests. We are only day two of the Olympics and it is hard to avoid. Just outside of the place where I’m staying, there was a giant protest this morning. I would estimate about 100 cops with some scary, scary weapons. The protesters were strong and loud and some of them ended up getting arrested.
As with many protests, there were two distinct groups of people. Those with a message and those who wanted to create chaos. It is always hard to tell who ends up getting arrested.
Later on in the morning, we walked by the Bay on Granville, where we had heard about windows beings smashed. I have pictures and video of the protests and the aftermath at The Bay. (Yes mom, I was careful)
Those who are not happy with the Olympics are certainly making themselves heard. You can only walk a couple of blocks or two until you run into a protest. It can be frustrating at times, but I try to remind myself that we in Canada. For some reason, that always makes me feel better. 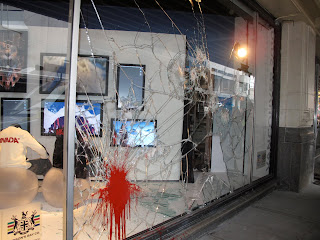 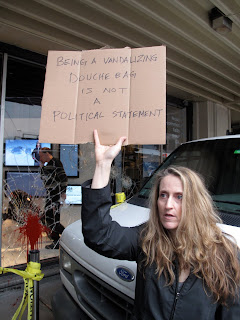 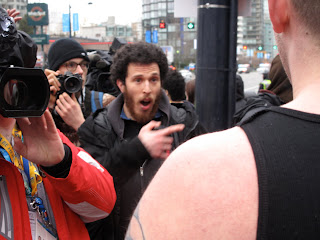 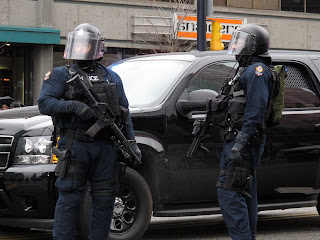 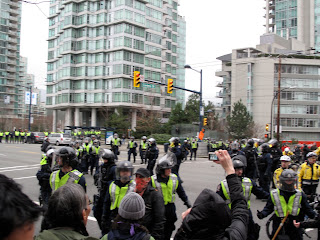 Warning: Video is a little intense and there is some bad language. If you hear my voice during it, it is because I was telling someone what I wanted for breakfast on the phone. It’s all relative.