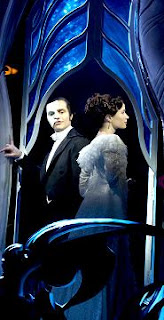 Tuesday night was a big night for Ramin Karimloo .

The Canadian singer debuted as the new Phantom in the Andrew Lloyd Webber’s sequel to the broadway classic, The Phantom and The Opera.
The show, called Lover Never Dies, picks up 10 years after the first story. The Phantom has moved on from Paris and now finds himself in New York City. Luckily for him, so has his eternal love, Christine Daae.
When the show premiered on Tuesday, it was front of a star-studded audience including Michael Caine, Gerald Butler, Rowan Atkinson and of course, Andrew Lloyd Webber.
The show reportedly cost $9 million to produce and so far is only garnering s0-so reviews.

Bloomberg:
“The musical is impressive and enjoyable, even with its heavy hokum and creakiest of plots.”

Telegraph
“Ramin Karimloo and Sierra Boggess sing superbly as the Phantom and Christine, with a real spark between them. Boggess is especially fine in the soaring title song, and Karimloo deftly combines menace and vulnerability throughout.”
The Sun:
“Director Jack O’Brien cranks up the melodramatic tension to a stunning ending.

But phantastic? Afraid not.”

Times Online:
“Whereâ€™s the menace, the horror, the psychological darkness?”
No plans for the show to come to Canada yet, but it won’t be long until Toronto’s Mervish family get their hands on it!