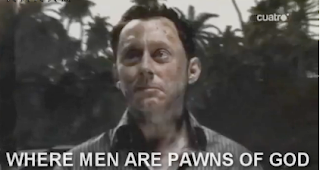 Little known Mike’s Bloggity Blog fact: I have a degree with an honors in Spanish. That’s right, I got a Spanish degree from New Brunswick. Try to guess how happy that made my parents.

I thought that was the definition of random until I saw the newest promo for the last season of LOST. Have you seen it yet? It’s pretty messed up. And I’m not just saying that because of the whole chess analogy thing. I’m saying that because it’s in Spanish.
Bet you wish you had a spanish degree now, eh?
Don’t worry subtitles are provided.

After watching it, don’t you wish the show was called Perdidos all the time?