Part Two: The good and bad of flash mobs!

Okay, so we need to talk about this flash mob epidemic that is currently taking over our country once dance number at a time.Â  Yes, I did just talk about it last week but since then, examples of good and bad flash mobs have surfaced and I feel like I have more to say about the new trend.

A few days ago, Air Canada held a very successful flash mob in its terminal in the Vancouver Airport.Â  Reason why it worked: 1) There was seemingly no press around. 2) People didn’t know it was happening.Â  3) Santa Hats.Â  Who the hell doesn’t love Santa Hats.Â  The only problem I could see was for the people who necessarily feel like they were in the Christmas spirit.Â  Or as my friend Kristin pointed out: “It gives me anxiety because I am worried someone late for a flight won’t get through.”Â  So even though the Airline will inevitably lose my luggage when I fly this Friday, at least I’ll have happy memories of this successful flash mob. 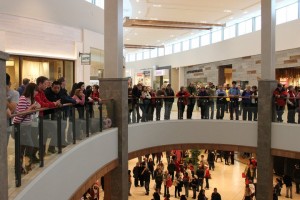 The second mob this week was held by Calgary’s Cowtown Opera.Â  Now before I continue, all you artsy loving folks need to read carefully.Â  You’ll note that I don’t have a problem with people singing and dancing, this is Footloose for godsakes.Â  My problem is with the confusion of what exactly a flash mob is.Â  The event took place this past weekend at Chinook Centre and was widely publicized to the public and the media.Â  Again, defeats the purpose of using the word “flash”. Secondly, they had a prominently displayed conductor waiting for the singing to start.Â  Sorta takes away from the surprise.Â  Someone mentioned this on the event’s Facebook page and the Cowtown Opera responded saying, “Co-ordinating almost 200 singers to sing unrehearsed without some type of conductor would have been far too risky, but thanks for the feedback.”Â  Puhhhlease.Â  If you aren’t going to follow the simple rules of a flash mob, then don’t say you are going to do one. And it was 150 people singing in a mall next to old people and crying babies, I’m sure they would have been just fine without a conductor.

So as 2010 comes to a close, let’s all try and respect our cultures newest trend.Â  After all, who doesn’t love to dance!