Oscars: What happened to Jessi Cruickshank? 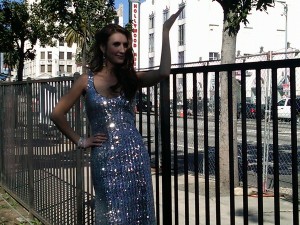 You’ll remember a couple of months ago that MTV’s Jessi Cruickshank moved to LA to maybe someday become the Nancy O’Dell. Somehow that hasn’t happened yet. (Rumor has it that she was supposed to be on Access Hollywood Live but the deal fell through after she moved to the city of Angels.) So now CTV has her covering other Hollywood happenings while she presumably waits out her apartment lease.

Well things reached an all-time low for Jessi on Sunday night when she was featured on the ETALK Red Carpet Oscar special. Nope, she wasn’t on the red carpet, she wasn’t even in the booth that over looks the stars.Â  She was in behind the theatre. Literally.Â  Like in an alley.Â Â  Yikes.Â  While the gag of her trying to get into the show would be funny for a video package, the running gag became awkward when it became apparant that she was probably actually trying to get in. Obviously to the cringe-worthiness of her segments, Jessi even tweeted pictures of her less-than-ideal locale.Â  The whole thing brought back something I have paid a lot of money to forget: The Olympic Hot Tub!

Does the name Ben Mulroney get you nothing in Hollywood?