Oscars: Let's talk about the ECMAs instead. 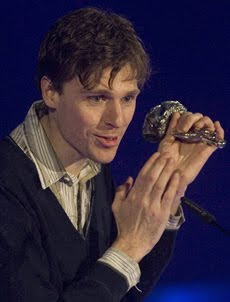 I was about to sit down and write the biggest and best Oscar review blog post you have ever read. But then I got over it. I just figured, why do what everyone is doing? If you want Oscar stuff, check this blog or this blog, or even this one.

Instead, I’m going to talk about the East Coast Music Awards. They were held on Sunday night in Sydney, NS and I’m guessing not a single person watched them. I’m sure it is no one’s fault, but seriously, scheduled against the Oscars? Come on!
Unfortunately, I don’t even know if the awards were broadcast on television. Sadly, not even drunk maritimers on live television can compete with Hollywood’s elite.
Not surprisingly Joel Plaskett won every award. Okay, not every award. But he did pick up six awards in total, including: Entertainer of the Year, Best Recording, Pop Recording and male solo recording.
Here is a list of some of the award winners. And yes, I know you may not have heard of most of them, but what a great time to discover new music! I mean, how can you not love a band named The Grass Mountain Hobos?
(And I don’t need to tell you to actually buy the music. Support Canadian music, not limewire.)
The Rankin Family