One too many sarahs 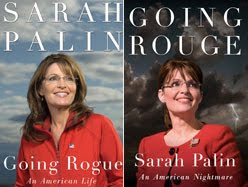 It probably could have happened to any one of us, but last night on CBC’s The National, they showed the wrong Sarah Palin cover when doing a story her autobiography.

You see, there is one book written by Sarah Palin and is called Going Rogue: An American Life. The other book, which is written left-wingers Richard Kim and Betsy Reed, is called Going Rouge: Sarah Palin, an American Nightmare.
Makes sense?
Together their covers are like those riddles found in newspapers, where you circle the errors in the opposite images.
That sound you hear? Someone at The National getting the boot!