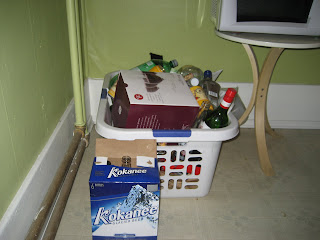 Calgary is a scary place right now. No, no, no, not because of the thousands of kids that will be dressing up as Disney characters or cracked up former popstars for Halloween. No Calgary is a scary place because we still do not have curbside recycling. Itâ€™s terrifying that even the smallest eastern Canadian villages have a system that seems oh so far away for us Calgarians.

I think one of the reasons why Calgary hasnâ€™t warmed up to the idea of recycling is apathy. No one likes starting new things or even change for that matter. But what Iâ€™ve always found really scary about this city is that weâ€™ll do everything to protect our children. We have hundreds of school and playground zones, we have gated communities, private schools and the biggest SUVs that Ford makes all in the name of keeping our children safe. But when it comes to making the world safe for them when they are older and they have children? It seems that weâ€™ve adopted the olâ€™ faithful, â€œNah weâ€™ll worry about that laterâ€ approach.

Having recycled for nearly my whole life I thought I might be able to help Calgarians who are still struggling with the concept. I am by no way an environmentalist, Iâ€™ve just decided that maybe our planet really is heading in a bad direction and maybe it could use a little bit of help. That is why I would like to present my list of the 5 easiest ways that the laziest, most apathetic, bored, tired, busy and stressed Calgarian can start making a difference. Take a read through, I think youâ€™ll realize that making a difference is just about as easy as finding a great place to eat in Calgary.

1.Do you hate the idea of recycling? Think it takes up too much space and can get messy? Well, keep a laundry hamper tucked away in a corner of your kitchen, every day put your recyclable items in it and when itâ€™s full simply pick it up, put it in the back of your Expedition and on your way to dropping your kids off at school, show them how easy it is to use the recycling depot.

2. Cotton bags at the Grocery Store. All you have to do is spend $5 to $10 once and youâ€™ll have bags that will last you longer than your HD DVD player. Think of all the plastic bags you wonâ€™t use if you just bring the cotton ones to the store with you instead. While you are at it, make sure you donâ€™t get plastic bags when you are shopping when you donâ€™t really need them. You donâ€™t need a bag to carry a DVD or CD. If you are going shopping at Chinook, keep all your items in one bag. You donâ€™t really need a different bag for each purchase you make.

3.Carpool. You know how expensive it is to park downtown Calgary? Well imagine if you could divide that cost between three, four or five people a month. It is so easy to carpool, especially for those communities outside of the downtown core, chances are your neighbors are all going downtown too, why not hop in with them. Put on some 80â€™s tunes and have your own version of Deerfoot Idol

4.Speaking of Idol, or should I say idle. There is no need to keep your car or SUV on while waiting to pick your kids up at school. Yeah, it may not seem like one car is a big deal, but imagine all the moms all over the world that are doing it. With gas prices on the rise, it just seems wasteful doesnâ€™t it?

5.Bring a mug to Starbucks. Every day thousands of people walk by their office kitchens on their way to a Starbucks for their morning java. Imagine if they stopped for a second and grabbed their favorite mug out of the cupboard and used that instead of the plastic cup, lid and that piece of cardboard so your hand doesnâ€™t hurt. I mean why not? Are you afraid people might look at you weird? Trust me, they donâ€™t look at the crazies downtown talking to themselves, they arenâ€™t going to look at you either.

There you have it. Five of the easiest steps towards making the world better for the kids of tomorrow. Now if we could just them to stop watching Hannah Montana.