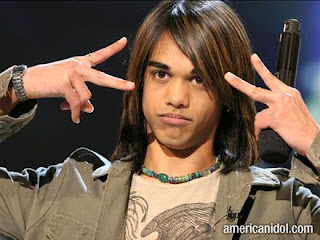 Every year, around this time, I can’t help but think of Brian Dunkleman. Â Remember him? Â He was the original co-host of the first season of American Idol, you know before that job went to Ryan Seacrest‘s highlights.

That’s right kiddos….it’s AMERICAN IDOL time (premieres Tuesday and Wednesday night)! And with the producers and writers fighting like they are on Big Brother (hey, there is an idea !), we needed the return of North America’s #1 show more than ever.
But the big question looming over Paula, Ryan, Simon and Randy is: Â Does anyone still care? Â
Last season of Idol was by far the worst one yet and produced some pretty mediocre talent. Â A couple of weeks ago I wrote: “Was Jordin Sparks the best singer in America, or was she just what was left?”
I can’t help but feel that American Idol really has double dipped the “unknown singer” pool one too many times. Â It’s certainly not a good sign that over the past month Katherine McPhee, Ruben Studdard and Taylor Hicks all got dumped by their labels like a bad prom date.
The executive producers have said that they know they screwed up last year and that this season will be one of the bests.
But aren’t they supposed to say that? Â Wouldn’t it be awesome if they just came right out there and said: “You know what? Â This season blows. Â We peaked with Carried Underwood. Â Sorry about that guys, but what else are you guys going to watch!?!?”
Truer words have never been spoken.
My question is that with the writers on strike, who is going to come up with stuff for Paula to say……
Wait…she comes up with that on her own?!
I’ll take 5 of what she is having.
*********************
And because I’m as boring and lonely as I was last year, I’ll be bringing back the ever popular and time consuming minute by minute playback of all the American Idol episodes. Â So be sure to check back each and every Wednesday and Thursday morning!
**********************
In news that makes my hair continue to fall out: Â Kevin Federline begins his guest stint on One Tree Hill as well tonight. Â Yet, Britney still doesn’t get the kids.