Now that's what I call a celebrity!

>Well itâ€™s another week and itâ€™s time for another reality show audition. The first one I tried out for was the MuchMusic VJ Search (twice), then Deal or No Deal, Second Cityâ€™s Comic Search and now Phil Keoghanâ€™s N.O.W!

You may know Phil as the host of The Amazing Race, but he is currently touring around Canada for the past two weeks casting for his new reality show called No Opportunity Wasted, or NOW.

Phil was in Calgary Tuesday night trying to cast his show that challenges people to face their fears. Itâ€™s kinda like Fear Factor, only without the bugs or the models. He was also doing a book signing for his book of the same name as the show.

I had previously submitted my online application but thought that I would have a better chance to win the producers over. Apparently I wasnâ€™t the only one. My rough estimate would say there was about 300 Calgarians who showed up at the McLeod Trail Chapters.
My roommate and I were lucky enough to get there relatively early and be only about 40 people back from the start of the line.

Phil came out and addressed the crowd. He was impressed with how many people turned out and insured us that we all get time with the Phil-mister! (My words, not his.) The line moved slowly but with most long lines, you become friends with those in front and behind of you. The guy in front of us was oddly competitive and wasnâ€™t up for chit chat. So my roomie and I made fast friends with those behind us.

Soon enough we got to meet Phil. He was amazingly nice. Some people would be bothered by the way he seemed to size me up. But not me. He said I had a great personality and that I would be great for the show. I told him that I had already applied and he wished me luck. I wanted to ask him if he could tell my roommate and I that he was sorry but that we had been eliminated from the race, but I chickened out. Oh well, next time. 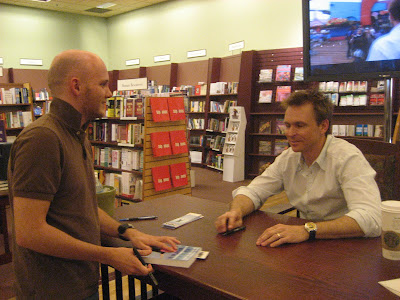 As I walked away and I looked at the increasingly long line winding through the Chapters book shelves I couldnâ€™t help but be proud of myself. As with every other show that Iâ€™ve applied for, Iâ€™m sure that thousands of people will apply. But what matters to me it that I did. I took the time to do the application, I took the time to meet Phil at Chapters. Does that mean Iâ€™ll get on the show? Probably not, but at least I tried, and there isnâ€™t one thing wrong with that.

For more information check out www.noopportunitywasted.ca (as long as you donâ€™t get on before I do!)