>One of my favorite things we did in Hawaii was find the set of the TV show â€œLostâ€. Readers of this blog no I havenâ€™t been the biggest fan of the show this season, although last week’s handcuffed muddy girl fight was pretty freakin’ sweet.

But while in Hawaii my friends and I knew we simply couldnâ€™t pass up the opportunity to find the actual set. We searched for it on our own at first and found little success. After picking our friends up from skydiving (gulp!) we stopped at a restaurant for some lunch in the area. We decided to ask our waitress if she knew where the set was. Turns out we couldnâ€™t have asked a better person, because as it turns out she has been an extra on the set since it began three years ago. She has been one of the survivors that you always see in the background. Did you know that they have used the same extras as survivors since the beginning? I didnâ€™t and I think itâ€™s pretty cool. Our waitress/extra said that the whole experience had been amazing because she was there from day 1 when they had no idea if the show would do well or not. She also said that she is so excited to see how successful all the actors had become. I couldnâ€™t help but wonder if she was just a little bit jealous. Although, it certainly didnâ€™t feel that way. She was very nice and sincere. She gave us excellent directions to the set and said it would be no problem walking around because they were not filming that day.

It didn’t take us very long to find the beach where they film the show. I was suprised by how accessible it was considering the secrecy of the show and now I was there on the set, in person! It was so much fun. It was so surreal to be there. This is where the â€œcastawaysâ€ slept and had lived. I had seen the set and itâ€™s surrounding scenery countless times on my tv and there is was right in front of and below my feet. The beach itself was absolutely amazing and the crashing waves were so loud. We even found a little visitor. I’m not too sure, but I think he might be one of the Others. 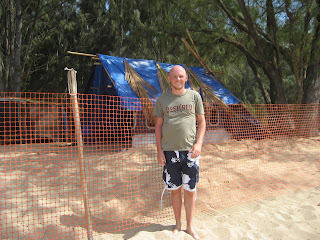 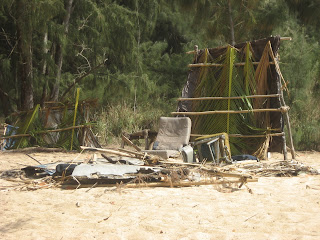 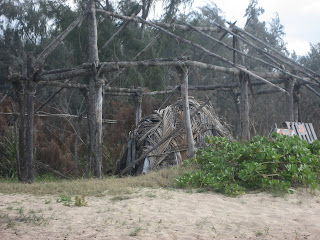 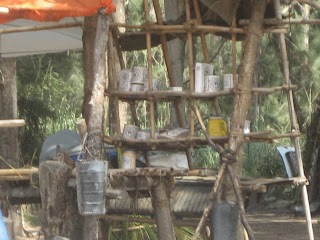 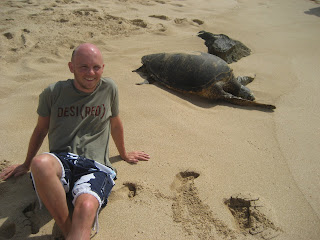 Me and my friend Lanny the Sea Turtle.

I’m pretty sure he is one of the Others. 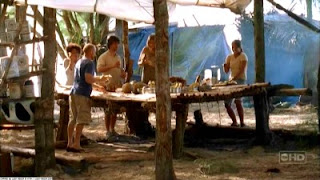 Our waitress is the woman on the far right.