No, Virginia there is no Santa Claus (in Calgary) 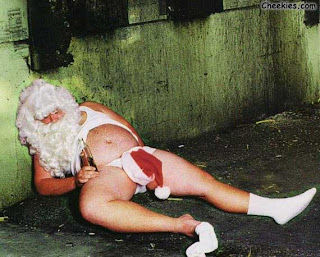 In an effort to public shame the city of Calgary, I must point out to Canada that this city does not have a Santa Claus Parade. Isn’t that nuts?

We used to. But then one year it was canceled due to construction. Apparently, Santa Claus can fly over the entire world in one night, but struggles to find an alternative to 6th Avenue.
That was two years ago. Since then, the parade has never returned. Instead, children can go down to Olympic Plaza for a Santa Meet and Greet. If you don’t live in Calgary, you should know that the Olympic Plaza is normally home to the whos-who of potential Big Brother Contestants and drug pushers. I guess they are essentially one in the same. All this to say, it’s a sketchy sketchy place.
All week long, I’ve been twittering about my annoyance that Calgary seems to think that it’s okay that we don’t have a parade. I mean Toronto has been doing theirs for 125 years, how could we possibly manage to drive a fat man down three city-blocks? It’s just un-manageable and un-reasonable.
Maybe Calgary thinks two parades a year is too much. After all we already have the Stampede Parade. If you have never been, it’s great. It’s about sixteen hours long and if you get really great seats, you get to see about a dozen horses have bowel movements, at the same time, you get to lift your feet so they don’t pee on you. All while oil and gas companies make floats celebrating how great they are. I guess it’s sorta like Christmas, only with STD-laced fake-cowboys standing in candy canes and elves. The only thing they really have in common is Ho, Ho, Ho(s).
Enough is enough, when are we going to get are Santa Claus parade back?