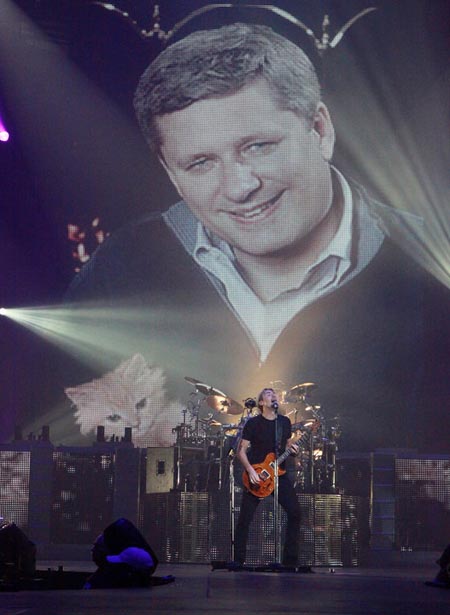 Like every Canadian, I’ve spent a lot of time making fun making fun of Nickelback.Â  Mostly because I’m jealous of their success, seeing as how they’ve pretty much been doing the same thing for years and seem to get more and more successful.

But one of things that helps me sleep at night is knowing that Nickelback seems to be in on the joke that is their international success.Â  Surely these rockers from rural Alberta can’t think that they are actually producer rock music that will last generations, do they?Â  Of course not.Â  They found a formula that works and if it continues to make them millions, why stop?

But at an Ottawa concert, Nickelback made a bold politcal statement which has me re-thinking this whole, Nickelback knows that they are jokes theory.

During the bands hit Photograph, a giant picture of Stephen Harper showed up on the screen behind Chad Kroeger. Stephen Harper and his son happened to be in attendance, which would normally be fine, but during a political campaign, the move seems a wee bit strange.

Now Elizabeth May really has something to be pissed off about!

So does Nickelback’s conversative support help you make up your mind about who your voting for?Â  Or does it hinder your decision?Â  Or are you just angry that you just wasted a few minutes of your time reading about Nickelback in general.