New Show: Living In Your Car 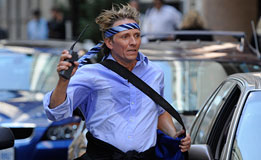 I’m always jealous of the people that have HBO Canada. Â They get all the cool shows. Â Take for example the new Canadian comedy called Living In Your Car.

The show stars John Ralston (Life of Derek, the Cowboy in those awesome Ford commercials) as a fallen corporate exec, Steve Unger, who was caught cooking the books and now finds himself legally forbidden from working in any position that involves “other people’s money”. Â Shunned by family and friends, under court order to teach an ethics class to other “fallen angels”, Steve now makes his home inside his luxury car.

Living in your Car premieres tonight on HBO Canada. Â If you aren’t lucky enough to get the specialtiy channel, you can actually watch the first episode for free on their website.