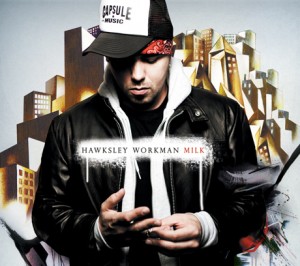 One of my favourite Canadian artists Hawksley Workman is releasing a new album today.Â  And no, you aren’t having a deja-vu, this is his second full-length album this year!

The first disc was released in January and it was called Meat.Â  If I’m being honest, I didn’t love, love, love it.Â  So I’m really looking forward to hearing his new album which is called Milk.

fun fact: my favourite snack is potato chips and milk.

Milk features songs like Warhol’s Portrait of Gretzky, Google Jesus, Stay Drunk and Keep Fucking and Animal Behaviour. So you already know it is going to be interesting.Â  You can also download the song Snow Angel for free off of his site.

If you are looking for great new music today, make sure you give Milk a listen.

And if the disc isn’t enough Hawksley for you, don’t forget you’ll be able to see him this fall in the feature film Score: A Hockey Musical.

As an added bonus, here is the video for his new song Not Your Parent’s Music.