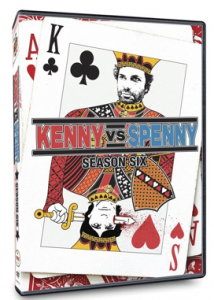 One of my favourite (and secretely) terrifying shows is celebrating the release of its sixth season on DVD today!

If you’ve never watched Kenny vs. Spenny, is about two guys in Toronto who basically go out of their way to destroy eachother’s lives.Â  And it isn’t a comedy, it is real life.Â  Every week, they challenge each other to a battle to end all battles.Â  Season Six had challenges like “Who Can Squeeze More Boobs”, “Who Can Get Further With The Other Guy’s Mom?” and “Who Do Black Guys Like More?”

I didn’t say it was high quality, I just said it was awesome.