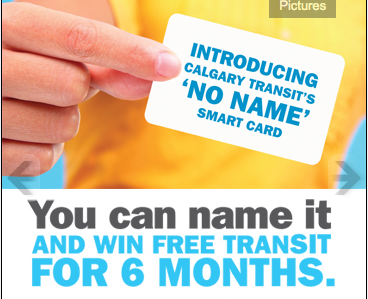 Remember a couple of weeks ago, when I wrote that Metro column about Calgary’s archaic transit system and how it needed immediate updates…well today, Calgary Transit announced that Calgarians will soon be able to pay using an electronic debit-type card!Â  I don’t want to say that it was my column that forced them to make the changes…ah heck, of course I want to say that…although I know it wasn’t.

Either way, Calgary Transit’s announcement is welcome news to anyone that is fed up with the outdated payment options (cash only, no change.)Â  If catching up to the 90’s wasn’t cool enough, the operation also announced that we’ll get to name our new card.Â  Hong Kong has The Octopus and soon Calgary will have something too.

The city is asking its citizens to name the new card, which is great since they aren’t hiring an american group and paying them hundreds of thousands of dollars to do something we are capable of doing.

For the record, I submitted two entries already.Â  One is obvious: Bloggity. “Oh crap, I forgot my Bloggity at home, can someone pay for me?”Â  It has a nice ring to it. The other is a little more realistic: The Quad.Â  Calgary is divided in quadrants, so it only makes sense.Â  I’m guessing The City of Calgary will never let me win, so I’m stating for the record that if they do use the Quad, it was my idea.Â  Yes, I’m that paranoid about my brilliant idea!

Calgarians have until July 3rd to enter, The top three choices will be posted to the Calgary Transit website. The winning smart card name along with the winner will be announced after July 8th, 2011.Â  The winning entry will live on in history and be used in millions of publications, posters and advertisements and in return, the winner will get….six months free transit.Â  Seems fair…no?

Fans of the electronic card shouldn’t get too excited, the card is still twelve months away, but I’ll take it regardless.Â  As long as I have to stop counting quarters like I live in a university dorm, I’m happy.