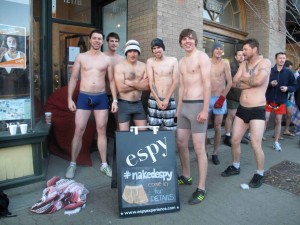 We’re officially four days into Movember, and there are already a ton of events and fundraisers going on, but there are probably none that involve hundreds of men standing outside in their underwear looking for free clothes.

Tomorrow will mark the second annual Naked Espy, an even that sees at least 100 men in their underwear standing outside of a boutique shop Espy, guaranteed to get to get a free shopping spree. All that’s requires is a miniumim donation of $100 to the Calgary Prostate Cancer Centre.

The first 50 fellas in line outside of Espy the morning of Nov. 5 will receive $500 worth of designer duds, while the next 50 will walk away with $300 of stylish new threads, all courtesy of event sponsors scott james, Fidelity, Mavi, 7 Diamonds, GSUS and more.

I went last year, to look at who would be brave enough to battle cold Calgary weather in order to get free clothes and I was so impressed with the guys who showed up in order to support such a great cause! Styling and clothing giveaways begin at 10 a.m., but the boys are sure to be lined up outside well before 8. For those who aren’t among the first 100 people in line, all purchases throughout the day on Nov. 5 will be 50-percent off with a donation to the CPCC.

Even though the temperatures are supposed to be quite chilly, don’t call social services just yet. Â Melrose Cafe will be there providing breakfast for the guys and rumour has it celebs like Brett Wilson will be there to help keep the crowds nice and warm!

Last year’s #nakedespy event raised $3,500 and saw only 30 men outfitted for free. This year’s goal is to triple that tally while giving away $40,000 worth of clothes to local men in need of some style.

If you want a sneak peek at the clothes up for grabs, visit theÂ Naked Espy site.

If you have a Movember-inspired event, let me know and I’ll be sure to include it!