My Last Plea for Being Erica Season 3 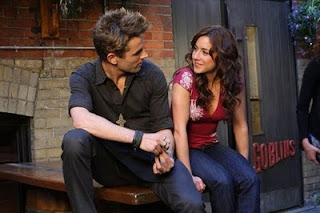 Hi, how are you? Hope you are doing well. Last night, Being Erica aired it’s second season finale on the Soap Network in the States. Since Canadians saw the finale back in December, you now have an entire continent waiting to hear if you are going to renew the show for a third season.

We are beginning to grow impatient.

I’m sure you have lots of great pilots lined up and yes, I know that BE’s ratings are not huge. But there is no denying that it is the buzziest show on your network. Last I checked, the gang from Little Mosque wasn’t on The View (some day Carl Rota, some day). Nor do you have a show that merits billboards in Time Square, people just don’t want to see Brett Wilson’s face the size of a giant billboard (like his ego).

Plus, can we talk about Erin Karpluk for a second. Even if Being Erica was the lowest rated show of all time, you would still need to hold on to Karpluk has long as you possibly can. Because once you let her go, it is only a matter of time before Marc “crazyface” Cherry or Shonda Rhimes snatches her up. You and I both know that Karpluk is waiting in the wings as Canada’s biggest rising star.

There are two ways to look at it. Sure, you could have another higher rated show like Heartland. But good luck trying to find someone who admits to watching it, let alone campaign for it. Or you could have a great show like Being Erica: A show that critics all over North America drool over and has a rabid fan base that will surely inundate your offices with Goblin’s coffee. I think the choice is obvious.

Renew Being Erica. Do it now, do it today.