My first Pride: Why it means more in Calgary.

Due to a technical error, my Metro column didn’t make it to the newspaper today, but I wanted to share it with you anyway. 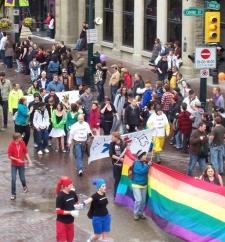 This weekend Calgary will be celebrating its 21st annual Pride Parade. Which, youâ€™ll totally be excused for not knowing even existed. After all there are lots of things about this city that I still donâ€™t know about, like what is a Calf Robe and why there are always hundreds of cars parked at that Petro Canada on the way to Canmore?

The coolest thing about this Calgary is that you can always find something new to do, like going to your first Pride Parade. But fret not loyal Metro reader, you wonâ€™t be the only person going to the parade for the first time. Iâ€™m embarrassed to say that this too will also be the first time that Iâ€™ve ever gone to the parade. I also didnâ€™t see Star Wars until years after University, so that should already tell you something about me.

In my social circles, Iâ€™m known as the parade snob. Unless thereâ€™s a jolly man waving to me at the end of it, Iâ€™m usually not interested. And I guess, since Nenshi is this yearâ€™s Grand Marshall, I now really have no excuse not to go. Heck, letâ€™s be honest, since it is Pride, itâ€™s safe to assume that there will be lots and lots of jolly men waving at everyone and Iâ€™m not talking about The Calgary Flames, who will also be making their first appearance at the Pride Parade.

For me, the cool thing about Pride is that we really donâ€™t have anything like it throughout the rest of the year. Sure there is the Stampede Parade and our same old celebrations, but why not transfer that energy and excitement to the first weekend in September? Are we really so boring that we can only do it once a year? I certainly donâ€™t think so, at least I hope not.

I donâ€™t really know what to expect for my first Pride parade. On one hand, itâ€™s being held in the province that only last year stopped listing homosexuality as a mental disorder, yet on the other, Iâ€™ve met some pretty amazing people from the LGBT community, who if nothing else, love defying the expectations and assumptions that people often have about Calgarians. And while I know some people might still have reservations about a Pride Parade, letâ€™s remember, the last parade we all went to in July had machines that literally picked up animal excrement. Yeah, it definitely has to get better.