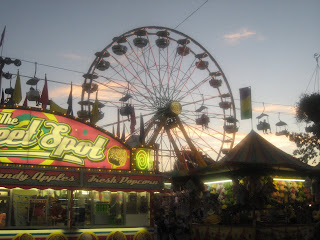 As I sit here on my patio on what is the first night in nearly two weeks that I will not be awoken by the sounds of fireworks and cowboys throwing up outside my window Iâ€™ve become reflective about Stampede 2007.

While thinking about my experiences at the Greatest Outdoor show on Earth Iâ€™ve realized that what is amazing about Stampede is that no two peoples experiences are alike. With so many things to do in the 10 days it would be impossible to recreate someone elseâ€™s experiences.

After nearly two weeks of â€œStampedingâ€,I was left with lots of great memories. I was also left with several daunting questions. Questions that I present in the following list:

-No matter how hard I train, I will never be as good as the super-kids of The Canadians Grandstand show. Seriously, are those kids genetically altered to smile that hard?
-Who the hell are the Doodlebops? I honestly thought I was going to see the waitresses from Cowboys do some sort of stage show.
-Is Stampede is the only time when mini-donuts, cotton candy and beef on the bun are considered to be actual food groups?
-What do people do with giant life-sized stuffed Tigers? On second thought, I donâ€™t want to know. (Special thanks to the couple that gave theirs to my niece. Karma will take care of you)
-Was I the only one creeped out by the exhibit where you could squeeze a milk-type substance out of a fake cowâ€™s prosthetic utters?

And finally, a lesson learned during Stampede 2007:
-Never wear open toed sandals to the Stampede grounds. My toes still smell like someone elseâ€™s cotton candy