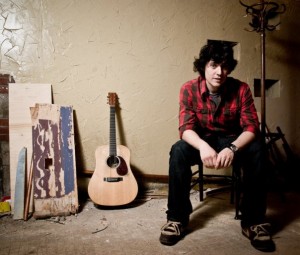 Andy Brown (website) is from just outside of my hometown of New Brunswick and although he regularly ignores my pleas to come out to Calgary, he is still such an amazingly talented singer song-writer. Â Easily one of my favourite independent artists, no offense Metric.

Brown has just landed a top 5 spot in the coveted North American-wideÂ Test Drive 2010 music competition, sponsored by industry leaders Taylor Guitars and Elixir Strings!!! While Andy and his band have already won a pair of Taylor guitars and a supply of Elixir strings and cables, the competition is far from over and Andy Brown needs his fansâ€™ support to take home the top prize, two days of recording time in New York Cityâ€™s Tainted Blue studio and a formal artist relationship with Taylor Guitars and Elixir Strings.

Since this is a North American competition, the feat is quite impressive. Â If you all wouldn’t mind taking a second to vote for Andy and his band, that would be awesome!!!

Voting for round two of the competition runs until September 15, 2010 and you can click here to vote!Â If you are feeling especially patriotic, you can vote once a day, everyday! Right now, Andy is sitting in first place!!!!!

Want to see Andy’s video submission? Â You can find it below!
Best of luck Andy congrats on making it so far in the competition. Â Now can you PLEASE do some Western Canadian-shows!?