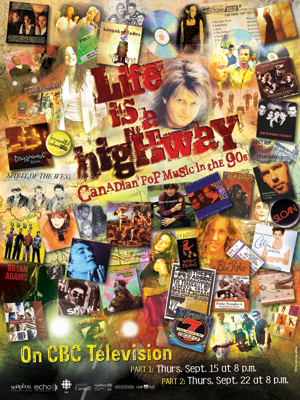 Upon hearing that CBC was doing a special documentary on 90’s music, I immediately had a thought:Â  Was it that long ago?Â  Do we really need a retrospective already?

Well it turns out that the 90’s were that long ago, because CBC has gathered a huge amount ofÂ  talent to commiserate the decade that saw so many Canadian musicians garner fame and success around the world.

The doc is entitled Life Is A Highway (good luck trying to get that out of your head now!) and will air on Thursday, September 15, 2011 8:00 PM on CBC. No surprise, Jian Ghomeshi will be narrating.

There’s a pretty great trailer for the documentary on the CBC site, you can click here to check it out.

I think it’s going to be fun to go down memory lane, so I’ll definitely be watching.

Who was your favourite musician from the 90’s?