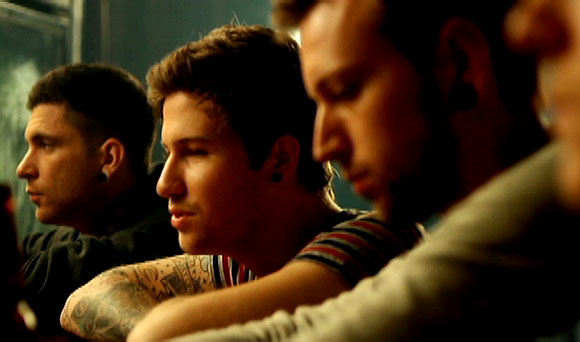 Tonight Much debuts its new series Discovered.Â  Well actually, it’s not new, it used to be called DisBAND, but they ditched the original format, changed the name and now we have a feels-like-new series called Discovered. More documentary than reality show, the show features the trial and tribulations of six different bands from across Canada. he six bands that will be featured this season are: Brett Boivin, Brighter Brightest, Colorsound, For The Weekend, Nightbox and Slow Motion Victory.

The show’s producers have found a variety of bands with yes, a variety of talent. With its debut tonight, it’s clear the bands will have a long way to go until they are ready for the season ending showcase in the Much studios. Helping them along the way is musician and producer Greig Nori (Treble Charger) as the six bands’ mentor. Some might dismiss him as a Simon Cowell wannabe, but his genuine interest in the bands seems to be authentic and sincere, which is refreshing.

My hope is that the show will focus on more than just the conflicts that will no doubt arise during taping, because I think a lot of aspiring musicians will be watching from home and I do think a show like Discovered could actually help lots of bands who dream of someday being on Much…or Mike’s Bloggity Blog.

I will say that it is too bad that show doesn’t feature any female performers.Â  DiscoveredÂ  suffers from a little bit of testosterone overload, and would benefit from the storylines that would have come with the struggles of being a female singer in Canada. And maybe I’m showing my age here, but hopefully I’m not the only who has trouble telling these bands apart.Â  There’s enough plaid, straitened hair, v-neck tshirts and chest tattoos to confuse even the most devout music lover.

Admittedly, I do have a little bit of invested in the series.Â  Back in November of last year, Discovered producers were in Calgary filming one of the featured bands For The Weekend.Â  I taped a segment with the band for the show, where I channeled my inner Rick The Temp and interview them about their experience on the show so far!Â  As with all things reality TV, I’m not sure if our interview will make the cut, but it would be a blast to see.Â  There’s no sign of my bald head in the show’s first episode, but I’ll continue to keep my eyes peeled!

Discovered premieres tonight on MUCH.

discovered, for the weekend, much