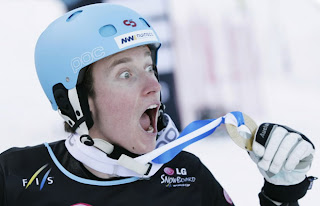 Does anyone watch Over the Bolts on MTV? While their other show, Peak Season, gets far more attention, Over the Bolts is a much more exciting and accurate portrayal of life on the mountains.

One of the show’s most energetic characters is Michael Lambert, who also appeared in the show Summer Sessions. Lambert competed in the Parallel GS and Parallel Slalom this past weekend and he had lots of reasons to celebrate.
With only a couple of weeks until the Olympics, Michael Lambert won the Men’s parallel slalom final at the FIS Snowboard World Cup.
If you’ve watched the show, you know that Michael was having a lot of trouble with his girlfriend Nina Micmic, a Serbian snowboarder. But luckily enough, Lambert was able to put aside all the on-screen drama and win the gold medal. Even more impressive, is that the Canadian snowboarder finished 25th place last year!
That’s right, I just Sport-Fact-ed you!
Congrats to Michael Lambert, officially the most legitamilly succesful MTV personality ever!
Good luck at the Olympics!
Click here to check out full episodes of Over the Bolts.