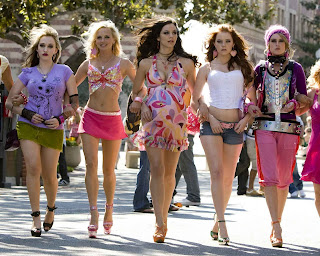 -First she loses out to Taylor “worst.idol.ever” Hicks.
-Then she releases an album which deserved more praise then it actually got. (I like to think she got Blake Lewis’d)
-Then her label dropped her like her last name was Malakar (more on him later)
-Things were looking up when she made this years Idol look like fools when she returned for a results show and completely stole the show with a beautiful version of Something with David Foster.

Then the House Bunny came along.
Did you even know that Katherine McPhee was in the The House Bunny (which opens today)? You would have to be Michael Phelps to see her in the previews which have been playing adnausuem for the past two weeks. Couldn’t she at least get a “also featuring…”?

So I don’t usually support a lot charities, mostly because my bank account should be one, but I’m going to help out Katherine McPhee because in my eyes she deserves it. Of course, it helps that one of my great friends from back home’s name is also Catherine McPhee…with a “C”

So here you go Kat (and Cat), here is a big picture of you in your first feature film. called The Housebunny. It’s stars Katherine McPhee and also features Anna Farris and Rumor Willis. (You’ll notice that in the picture I chose you are in the centre of it and just far enough away from Rumor Willis.)

And as for you Sanjaya Malakar. I know people have a strong dislike for you. But I can’t help but be a little jealous about how long you have been able to ride out your 15 minutes. Have you even released a single yet? Let me check….nope. But now comes news that you are doing commericals and so I did my research and it turns out that you commercial for Nationwide insurance is as bad as it could possible be. And I wouldn’t have it any other way: