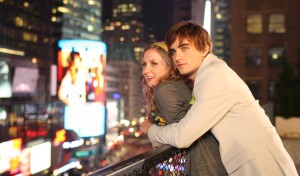 Let’s be honest, 10 years in, either you are watching Degrassi or your not. Â And if you aren’t, you are still missing out on what is still Canada’s most original and truthful drama.

Which is why the premiere of the new TV movie Degrassi Takes Manhattan is a perfect way of getting your feet wet before the show returns with new episodes on Monday!

But if me telling you that you are missing out, still isn’t enough. Â Let me see if I can entice you with these five juicy tidbits:

Here’s why you should watch Degrassi: Takes Manhattan (even though you really don’t want to):

1. TNG originals Emma (Miriam McDonald), Manny (Cassie Steele) Spinner (Shane Kippel) and Jay (Mike Lobel) all return! Â (And if I might add, set themselves up quite nicely for a spin-off.)
2. Ever heard of something called Twin-cest? Â You will after tonight.
3. Only two days of the movie were actually filmed in NYC. Â It is fun to guess which scenes are real!
4. If you are going through The AfterShow withdrawal, MTV Canada’s Jessi Cruickshank plays the movie’s bad guy! Lainey from Lainey Gossip also makes a split-second cameo! The movie is CTV synergy at its best!
5. The movie marks the end of the road for two of my favourite Degrassi actors: Paula Brancati and Dalmar Abuzeid. They are great, so catch them while you can.