Thatâ€™s something Iâ€™ve heard since I started losing my hair in high school. I mean, thereâ€™s lots of things great about Charlie Brown, but hearing that you look like him usually isnâ€™t a compliment. But itâ€™s definitely not as bad as being called Jon Arbuckle, which in terms of insults referencing fictional cartoon characters with sarcastic pets is probably the lowest you can go.

So since everyone always compared me to a comic book character anyway, when I got asked to help launch the new Ritzmation website, it seemed like a natural fit, because finally, I would get to control my comic book destiny! As it turns out, even in the comics, Iâ€™m not much different: Iâ€™m not great at sports and I like Ritz crackers.

The app is actually a ton of fun to play around with. Because you get to basically build your own animated comic, but you donâ€™t have to worry about any of the hard stuff like designing it or, well, animation. 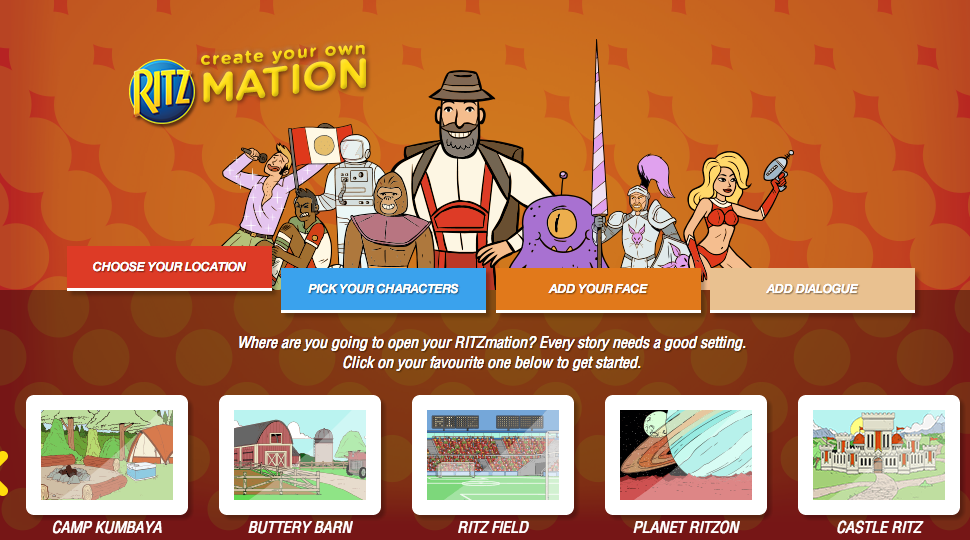 First you start with a location, which includes places like Ritz Field, Planet Ritzon and Castle Ritz.

Up next and probably most importantly are the characters. You can pick up to three and thereâ€™s some good ones. You can choose anyone from Streaky Pete to â€œDiveyâ€ Dave and an alien named Z-Tir. Thereâ€™s also a monkey named Dr. Simian and a singer named Johnny Ritz.

After you decide on your characters is when you get to really star in your own comic strip. The app lets you upload your photo, so you can take over one of the characters. I, of course, took over the character sitting down beside a field. It was the one most like me.

After that, all you have to do is add some witty banter and youâ€™re done! I made one already, but I can see myself making more in the coming weeks. I might use them as birthday cards for a while, why not be a little creative.

You can check out my animation here, then post yours in the comments so I can see them!