More than you can Handler 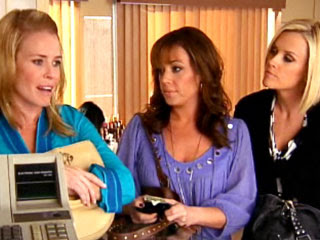 A couple of times a week, I always go to this one website that I know I really should go to. I’d probably have a lot of explaining to do if I was ever caught, so I always have to be very careful. And because I currently trying to keep the biggest secret ever, I’ve decided to risk EVERYTHING and share this one with you instead.

It’s called: In The Motherhood.

Okay, stop laughing, yes I go to a website with a tag line: For Moms. By Moms. About Mom. But I have an excuse. The website features an absolutely hilarious mini-show by the same name and it stars Chelsea Handler, Leah Remini and the often over looked Jenny McCarthy. Each episode is only like 5 minutes long but it always makes me laugh out loud….even if I am in my office. I’m never really sure if I am laughing at the show itself or the fact people keep having kids in the first place. Seriously people, buy a TIVO or a some nice couches.

I found this website because Chelsea Handler also has her own TV show, that airs late night on E! called Chelsea Lately, and she would mention it every now and then. Lately has quickly become one of my favorite late night offerings because Chelsea seems to call it like it is, no matter how brutal it might be. But what do you expect from the woman that has also written two books called My Horizontal Life: A Collection of One-Night Stands and Are You There Vodka? It’s me Chelsea. I haven’t read them yet because, let’s be honest I don’t read, but the titles alone are genius.

Anyway, I wanted to share this all with you because In The Motherhood has just been picked up for 13 episodes by ABC and I wanted to officially say that I liked this show waaaaaay before you did. Check out the first episode to see what I am talking about.