I was kinda over 24 last season. It was just like: “Ugh, enough already. Are they ever going to trust Jack?”
But I have faith in the upcoming season, I have to, because everyone is saying that it is probably the show’s last.
TVAddict just posted some of the newest shots of the upcoming season and I can’t help but get excited.
Check out this sexy cast photo: 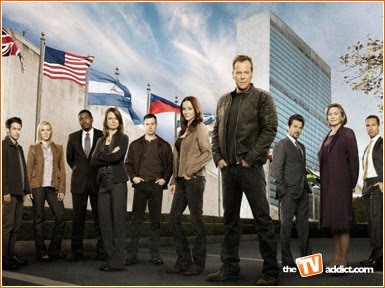 And no, your eyes aren’t tricking you, that really is Freddy Prinze Jr looking cool and bad ass! Amazing.

Also featured this season, will be Canadian Nazneen Contracter, who told me she initially signed on for two episodes and is so far in at least sixteen!
Global returns to Global TV on January 17th.