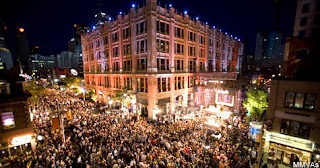 So with the world falling apart around us, I had a lot to think about lately.

Mostly about the MMVAS.
I know the video award shows were actually a couple of days ago, so this posted might seem dated, but I honestly had to take a couple of days to process that annual shit show that is the Much Music Video Awards.
I think it sucks that the whole Perez Hilton vs. Black Eyed Peas drama over shadowed the actual awards. Â Imagine your whole job is to plan the awards and the next morning all anyone is talking about is a bitch-fight between two people in a hotel. Â I would be pissed. Â (side note: I think what happened to Perez was really crappy, but if he knew that Will.I.Am didn’t punch him, why did he tweet that he did. Â Don’t stir the pot and blame someone else).
The actual awards are impressive. Â The coordination that must be involved is overwhelming for me to think about. Â It is definitely one of the most grand and unique award shows out there. Â After theÂ Gemini’sÂ of course.
But the awards are what they are. Unfortunately it seems that the awards are turning more and more away from their all-canadian format, which always made the MMVAs stick out. Chris from Out is Through pointed out that all the Canadian bands were stuck on rooftops or side stages for their performances, while major american acts got to be on the big stage. Â I was confused to why the Jonas brothers were co-hosting, especially because they neverÂ acknowledgedÂ the VJs who were also hosting. It was a like a mashup of two different award shows.
Finally, I wish MuchMusic kinda laid off the Nickelback if for no other reason to give smaller bands a chance to shine. Â It’s never really clear how the MMVAs are decided, so why not help out the smaller bands like Inward Eye and Mariana Trench that could the exposure.
But the MMVAS were HUGE for muchmusic this year. Check out some of these stats:
If you missed the awards, CTV will be re-airing them on HD this Saturday!
Did you watch the MMVAs? Â How old did you feel watching them? Â Will Rumor Willis ever learn how to speak into a microphone?