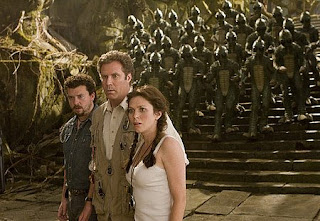 Have you ever hated two movies, without actually seeing them, more than Land of the Lost and My Life in Ruins. For shame Will Ferrell and Nia Vardalos. Double shame to Richard Dreyfus for being in Ruins. Which is obviously where your life is. Hey Will Ferrell, why don’t you try not yelling all the time. It’s not funny. If you stopped yelling all the time, you would hear that people are over you and your yelling. Stop yelling.
I would rather dedicate my life to making sure Spencer Pratt is the next President of the United States than step close to either of the movies.
Crap. Pure Crap.
Secondly, The Hangover looks awesome and according the to sneak previews it is ridiculously funny. So yeah, I’m up for that.
Thirdly.
Go see Drag Me to Hell. Then try to convince me that you didn’t freaking love it. It’s impossible. You will love it. You will want to marry it. You will want to marry and it have little movie trailers with it. It’s amazing. Favorite movie of the year. See it.