Mike and The Olympian 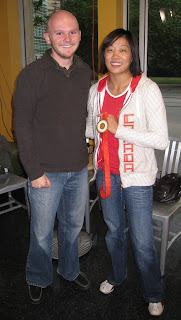 Today I met Carol Huynh. She was the first Canadian to win a medal after a week long drought at this years Summer Olympics in Beijing. Not only did she win a medal, she won a GOLD medal and it was in wrestling at that.

I couldn’t believe how tiny she was, I seriously think I could take her! I told her that she should eat more burgers or at least a burger. I also asked if she got free stuff from HBC and she said no. I thought that was pretty cheap of them. I mean somebody is going to have to wear their hideous Olympic apparel now that the Olympics are all done, maybe they should give them to the athletes and homeless, I mean I think they make about the same anyway.

The coolest part was that she let me hold her gold medal! Pretty freaking cool. I thought it was funny that when she took her medal back she just threw it in her purse, beside her lipgloss and cellphone. No fancy case or anything like that, come on Olympic Committee you could buy a dozen cases!

But she was really cool and it was an honor to meet such a successful athlete! Go Canada!