Mike and the Bingo Hall 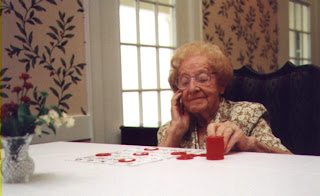 The world of Bingo Halls has been forever immortalized as a smokey and dingy place where societyâ€™s leftovers go to spend their last days and dollars.

So you can imagine my concern when I was asked to spend a night volunteering at one of our cityâ€™s largest Bingo Halls. The reason? My roommate works for a non-for profit organization and the Bingo Hall contributes nicely in return for a handful of volunteers for their busiest Bingo Nights and since my roommate threatened to stop doing the dishes, my hands were essentially tied.

So as I stepped into the hall and the smell of smoke covered me like a warm cancerous blanket I as weary of how the night would go. Iâ€™ll be honest, I had already partially written this piece in my head, it was going to be cynical, full of mockery and chastise this cityâ€™s bingo players for wasting their time and money.

But then something happened.

I donâ€™t know how or when, but wouldnâ€™t you know it those Bingo players and their 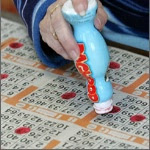 dedication to the game actually got to me. Especially the ones with lightly multi-colored Bingo dabbed hands that rubbed my bald head for good luck.

Working in a Bingo Hall is not as easy as it might sound. Bingo players are very very superstitious and particular. The way they would chose who would be able to sell them Bonus Bingo cards reminded me of the often-traumatizing â€œpicking of the teamsâ€ ritual during the formative high school years. It is very easy to get flustered and lose your concentration. I honestly havenâ€™t had so many people shake their heads at me since the last time I had dinner with my parents.

It would be easy to be cynical about the experience. After all, Iâ€™m pretty sure I inhaled enough second hand smoke that only after a handful of hours my voice is raspy and my clothes should probably be burned. But the experience of meeting so many nice people at once will always overrule any potential increase I may now have in dying of lung cancer, even though I have never smoked a cigarette. (High School parties do not count mom).

What impressed me the most about the Bingo players was their commitment to the game. Most of them had a different assortment of lucky charms from the obvious (troll dolls) to the concerning (an unidentifiable type of fur hat). And in case you havenâ€™t visited a Bingo Hall lately they also have DigiBingo now, which is an electronic version of the game that you play along with the traditional paper game, all while the Bingo announcer is announcing numbers for the main game, Bonanza #1, Bonanza #2 and a Satellite game which is played all over Alberta at once, phew! One can also buy scratch ticket, as well as Pull Tab lottery tickets. I mean really, the only thing in my life that I show a similar level of commitment to is going to the bathroom and reading Perez Hilton.

My only complaint/observation is that the Bingo Halls should really have Blue boxes at the ends of each table. There is really no reason for all those used Bingo cards to be discarded in the garbage when they can easily and cheaply be recycled.
Before I knew it my 5 hours of volunteering was over and now my roommateâ€™s organization will be given a hefty donation. I mean sure there are probably more important things I could do with my time, however, I donâ€™t think you can put a value on watching a table of seniors who are able to smoke, play Bingo, read a trashy novel, drink coffee and tell me to â€œShut up and stop talkingâ€ all at the same time. If anything else I totally know where I am having my 26th Birthday party.