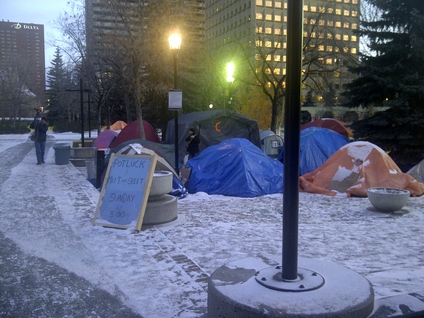 If you live in a major city around the world, chances are you have a group of people who are supporting the Occupy movement by taking over popular city locations with tents and protesters.Â  Depends on who you ask, the groups either all seem to be supporting the same thing, or they are supporting something else altogether.Â  Truth be told, I’m confused by all the Occupy movements in Canada, mostly because the things that the original Occupy Wall Street protesters are upset about are simply things that didn’t even ever happen in Canada.

So this week, I dedicated my Metro column to pushing for the end of the Occupy Calgary movement, with the promise of taking over Olympic Plaza…once all the fecal matter is cleaned up. For me, this movement has highlighted the importance of our city parks, even if they are the underappreciated ones like Olympic plaza.

This column has started quite a bit of debate on Facebook, Twitter and the comments section.Â  Feel free to weigh in, let me know if you agree or disagree.