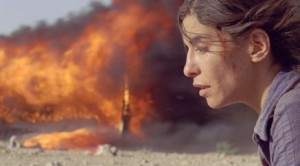 Chances are you haven’t heard of either of the nominees but as our country’s only hope of getting invited to the Oprah Oscar special, they definitely should be celebrated. Ironically both nominees are from Quebec, luckily this isn’t a political blog, so I’ll just move on and let you make your own jokes.

Filmmaker Denis Villeneuve was shocked to hear that his film Incendies was nominated for best Foreign picture, telling The National Post, “I think, from now on, I am going to enjoy the ride. . . . It’s a dream (to be nominated for an Academy Award), and on the night of the awards, I think I’m going to be thankful just to be there with so many other talented filmmakers whose work I respect so much.”

Fun Fact: Incendies was this country’s fifth nomination for Best Foreign Film.Â  Can you name all five?Â  (The Decline of the American Empire, Barbarian Invasions, Water, Jesus of Montreal and now Incendies.)

Canada’s second nominee ended up getting the only nomination for the Montreal-filmed Barney’s Version. Makeup artist Adrien Morot picked up a nomination for Best Make Up.Â  The movie was thought to be able to garner a few more nominations but likely lost out to the film’s low level of buzz compared to other Art House flicks. The good news is that Morot is up against the little liked Wolfman and some movie called The Way Back.

While we won’t know until February 27th if any Canucks will take home Oscar gold, one thing is for sure:Â  Score: A Hockey Musical is PISSED.