Me vs. Porcupine (The ultimate standoff)

>I was never a boy scout. I literally quit after four days when I realized we actually had to work to get those cool badges. It wasn’t so cool then.

But ever since I moved to the mountains I’ve been kinda regretting that move so long along to leave the boy scout behind. I mean sure I would have loved to make that cool race car, but what I really regret not knowing is wilderness survival. I mean sure living in the mountains you know what to do when you encounter a bear or a tiger…or whatever the hell lives in mountains. But today, I encountered an animal that I had to know idea how to deal with. One so scary that I was literally frozen in my track for 20 minutes.

So what did I do? Well, I stood there for 10 minutes, took a few pictures (see below) and then I called friends. I was honestly scared, he had his quills all perked up and everything! Of course, none of them answered in my hour of need. I needed to tell me what to do. Maybe they would know? Or at the very least they could wikipedia it. But no, no one was around! Jessica, I’m talking to you.

So the porcupine grew tired of me (as most people do) and moved on. It was close call but I made it out safely! So does anyone know what the age limit to join the Scouts is? Wait, is that creepy? 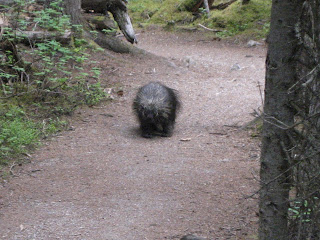