Me and Steve Martin 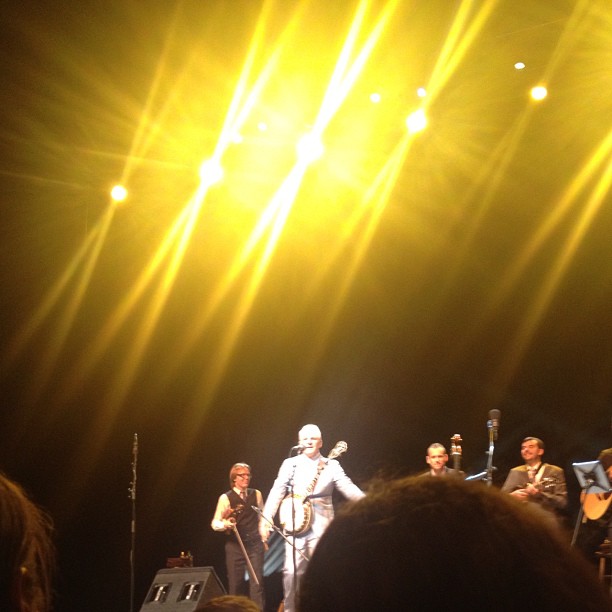 Okay, so the title of this blog post would imply that I hung with Steve Martin this weekend, and let’s be honest, I didn’t. But what I did do was go and see him and concert, which was so great, I kinda feel like we did hang out, just with our 2,000 closest friends.

I’ve mentioned a few times my affinity for Steve Martin. More than just a comedian, he’s also a brilliant writer and one hell of banjo player. Luckily for everyone that saw him in concert on Saturday night, when he tours, he’s a little bit of everything all rolled into one.

I think a lot of people probably bought tickets to his show, not really knowing what to expect. Technically the tour is called Steve Martin and The Steep Canyon Rangers.Â  That’s the band that he’s released several Blue Grass albums with and they’ve even garnered a Grammy. But this is Steve Martin, surely he wouldn’t just sit there for two hours and play the banjo, right?Â  Right.Â  While most of the night was definitely a bluegrass concert, almost every song was cushioned with Martin telling a few jokes, usually at the expense of his band, who seemed happy to go along for the ride.

While I knew Martin loved to play the banjo, to see him in his element is definitely something different altogether.Â  Ever the consummate performer, it was wonderfully amusing to watch him as his fingers whizzed across the banjo’s strings, like he’d been playing forever, probably because he has.

The tickets to the show said very clearly: “No photos, no phones and no tweeting.” I did my best to respect the request, while Martin was enjoying the applause for his stellar encore performance, I couldn’t help but take one picture, you know, just in case I ever forgot that I once stood a few feet from one of my biggest idols.Â  On second thought, I’ll probably never need that photo.