McDonalds is hiring 500 Albertans, so I went behind the...

This Wednesday, September 14th, McDonaldâ€™s Canada and its franchisees will open their doors with plans to hire 580 new employees across Alberta and the Northwest Territories, as part of their West Hiring Day. In a province that is filled with people currently looking for work, that many jobs is something significant .

Knowing that Iâ€™ve always loved my time at McDonalds, the company asked if I would be interested in going back to work for a few hours to see what has changed, and interestingly enough, what hasnâ€™t.

I jumped at the chance to put back on the uniform. Truth be told, when I left my job three years ago to be a full time blogger, it was the scariest time of my life. I mean being a writer is scary, but a blogger? I was terrified. But, and Iâ€™m being totally serious, my back up plan was to get a job at McDonaldâ€™s.

I thought Iâ€™d be good at it, and it seemed like there would be room to grow. Honestly, I have friends that I met when I worked at McDonalds 19 years ago that are running their own franchises now. Thatâ€™s what I call career growth.

So I was lucky enough to spend the afternoon at the McDonalds in Strathmore just outside of Calgary. You might be wondering why I went that far out of the city, itâ€™s simple: I had heard great things about the what the owner Usman Jutt was doing there, and I wanted to see for myself.

First things first, many McDonalds in Alberta pay more than minimum wage, Strathmoreâ€™s is included in that. Another neat thing is that Jutt working hard to make McDonalds a place where community gathers, and why not? Free wifi and free coffee refills? I need to be holding all my meetings there. And in a couple of weeks, Strathmoreâ€™s McDonalds will be holding an art show. Thatâ€™s pretty cool.

So fun being behind the counter at @McD_Canada again. And no, I'm not charging people extra for McChicken sauce. pic.twitter.com/yJTptBiWWz

Working behind the counter again was a real treat. I had fond memories of hours behind the fry station, which is pretty much the same. But a lot has changed too. McDonalds are basically full-service coffee shops now, and food is served a lot fresher than in my day. And thanks to the self-serve kiosks, the demands of the staff are greatly increased. A lot of people thought those kiosks would mean that McDonalds would be hiring less people, but itâ€™s actually the opposite. Thatâ€™s because people ordering from the kiosks expect their food to come just as fast, so the restaurants have to hire more kitchen staff to keep up with the demand. And itâ€™s not just the kitchen thatâ€™s busier. From the time you order in the drive thru, employees aim to get you your food in 60 seconds! Thatâ€™s amazing! Especially considering each of the 600 sandwiches served every hour are made fresh to order.

But none of the staff I talked to seemed to mind the speed at which they work. I spent a lot of time talking to the staff (much like I did when I worked there), and they all genuinely liked working there. Itâ€™s pretty obvious when someone doesnâ€™t like their job, and I didnâ€™t see any of those people there. And really, think about all the people you know that worked at McDonalds, no one ever complains about working there, we all have fond memories. Thatâ€™s pretty rare to have fond memories of one of your earlier jobs. The staff and I also talked about the stigma of working at McDonalds, which is completely undeserved. Societyâ€™s mistake is judging and assuming that they donâ€™t like working there and even that itâ€™s an easy job, because itâ€™s certainly not. Itâ€™s fast-paced and exciting, and they all loved it. That was very evident.

19 years later and the fry staton is still my favourite. @McD_Canada pic.twitter.com/2U5PmOfdbq

In fact, it made me feel bad that I thought McDonalds would be a good backup plan if I didnâ€™t make it as a blogger (whatever making it as a blogger means.) I had forgotten the kind of job working at McDonalds is. The staff works incredibly hard, thereâ€™s no mistaking that.

Of course, an exciting job is not the only great thing; thereâ€™s the discounts too. When I was younger it was called the Gold Card, and it got you 50% off all McDonaldâ€™s food. Todayâ€™s staff now have a platinum card and on top of the discounted food, it comes with a whole bunch of discounts to places like Rogers, Marks, Apple, RBC, Via Rail and even hotel discounts. Seriously, what job offers that many perks?

Before I knew it, my shift at McDonalds was over, but I came away with a whole new respect for the staff. I also learned that McDonalds is ahead of the curve in so many other ways. For one, they are beginning to introduce gender-neutral washrooms, a massive step for those fighting for equality. And no, they no longer ask kids if they want a boy or girl toy, they simply ask them which toy they want.

If youâ€™re looking for work, like I know so many Albertans are. I definitely think you should check out McDonaldâ€™s West Hiring Day on September 14th. McDonaldâ€™s ongoing commitment to provide meaningful employment opportunities to Canadians of all ages might be exactly the thing you were looking for. 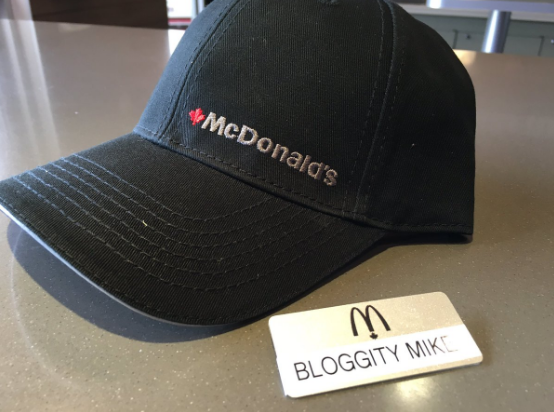