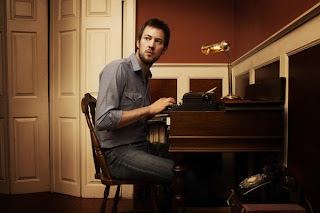 Photo by Victor Tavares
Matthew Barber is a canadian folk singer whose CD Ghost Notes is nominated for Roots & Traditional Album of the Year at this weekend’s Junos. Ghost Notes departs from Barber’s most recent efforts in that it emphasizes the moodier, more stripped-down side of his songwriting. As the Ontario native gets ready for the big awards show and maybe the biggest hockey game of his life, I got the chance to talk with Barber and getting nervous on stage and having an idol listen to his CD.

What are you doing to prep for the Juno awards?

Nothing really, I’m just looking forward to it. Basically I just have to show up for it and have a good time. I probably should be getting in shape for the hockey game (Juno Cup). I’m looking forward to it and I’m kinda nervous. I hope my equipment is good enough. But I’m not really nervous about the awards at all actually. I’m happy to be invited to the party and the dinner, the open bar, get a free meal out of it and I get to dress up!
Are there any specific acts that you are planning on catching while in Vancouver?
I don’t think I’m going to have time to see any actually, I have the hockey game and then some party I have to go to on Friday. Then Saturday, I have the awards dinner and then my own gig (Doolin’s 11pm). Then on Sunday night we have the awards show.
What do you think about Matt Good calling the Juno awards show pointless because of the way the major awards are handed out. What are you thoughts on allowing record sales to play a factor into who wins?
I don’t think anyone thinks the Juno awards are equivalent to something like the Polaris prize, which is voted on by the critics. With the Junos there is more of an industry element to it. I don’t really think it’s a problem that sales are a included with it, as long as you realize that the Juno awards does not equal the best musician in the country, but rather the more commercially successful ones. I recognize that and I think people should know that.
The awards put a lot of focus on Canadian music and I certainly don’t see a problem with that.
Your CD Ghost Notes will have it’s american launch on April 14th. Do you prep yourself any differently for playing shows in the United States?
No, I don’t think so. I still haven’t done a lot of shows in the states, just some one ofs here and there. I haven’t done a proper tour there yet, but it’s always fun to play in different countries. There is a heightened excitement to be playing music outside of canada. For me it’s fun and it’s nice to get out of the same circuit of canadian venues that I’ve been playing for 5 or 6 years now and have the opportunity to play some new places.
It’s kind of exciting because I sort of have a blank slate in the states, I mean no one knows who I am and it’s kinda nice to start fresh in a territory where people don’t have any pre-conceived notions about you, I’m kinda looking forward to that.
Do you still get nervous for your shows?
I do still get nervous for your shows! Some more than others, I always get butterflies in my stomach, which is good. I think that means that you still care.
The Canadian Music industry is certainly tough. So why do you do what you do?
It’s what I love to do. When it’s going well, there is nothing else I would rather do. When it’s not going well, or when you feeling like your not getting the bounces going your way, it can be frustrating. But you have to keep your chin up and keep plugging away. I’ve definitely had my ups and downs over the past 6 years. But when I’m up on stage and I feel the love from the audience there is just no better feeling. I love writing songs, I love recording. I think it’s just a tough thing to walk away from when it’s your passion. I don’t know what else I would do. I think about it all the time and it’s a tough way to make a living. I’m not getting any younger and I have had those nights of lying awake at night thinking what I’m I going to do with my life. But I love being a musician.
Have you had any “holy shit moments”?
Yeah, I’ve had a lot of them. When I’m feeling frustrated or down on my luck with respect to the industry, I always have to remind myself of what I felt like when I was 18 years old, messing around on guitar, writing songs and having all these idols in the Canadian music scene. I wondered what it would be like to play a show at the Horseshoe. I never really seriously thought I would have a career as a professional musician. It was something I thought I would love to do. Since then and my passion for music has grown and grown and grown. But when I think of what I’ve accomplished now, I would have been flabbergasted to know, back as a teenager, that I would do all the stuff that I’ve done.
If you could give your CD to one person, dead or living, who you want to listen to it?
Neil Young.
Is there a question that you get asked a lot that you hate answering?
Uhhh, “How long have you played the guitar?” But I will happily answer them all, I appreciate it when people take an interest in what I do. It’s flattering and it’s apart of the business.
Matthew Barber will be playing at Doolin’s in Vancouver on Saturday night. (Hopefully hours after his win!)