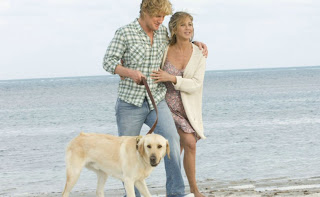 That’s what I get for taking a couple of days off.
While the rest of us were taking the holidays off to enjoy time with friends and family, some people with very poor choices in movies made Marley and Me the #1 movie at the box office.

More upsetting is the fact that the Jennifer Aniston and Owen Wilson film broke records with it’s opening! Marley & Me had the biggest box office total on Christmas Day ever ($14.7 million)! It has now grossed more than $52 million since opening on Christmas Day. Doesn’t that seem crazy? That doesn’t even seem right or legal. Did people just want to throw away their gift certificates on a craptacular movie?

Maybe movie-goers didn’t want to take in the serious Oscar contenders like Benjamin Button and Doubt just yet. But they will, they’ll come around and soon this stupid dog movie will be out of our memory for good. At least until the sequel….

Also upsetting is the fact that Twilight has now officially made more than 007’s Quantum of Solace.