Today I’ve got something different for you!Â  Both myself and Bloggity Reviewer Dan Meades went to hear Malcolm Gladwell speak tonight.Â  Dan is a big fan, and judging from the huge crowd he wasn’t the only one. I, on the other hand, suffer from FOMO–a.k.a. Fear of Missing Out. It’s a crippling disorder that requires me to see something if everyone else is going to be talking about it.

Thus, I present you with a pair of reviews.Â If you’re a fan of Malcolm Gladwell’s check out what Dan had to say. If you’re like me and you’ve never heard of him, my review’s for you! 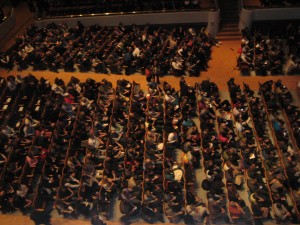 Malcolm Gladwell sold out the Jack Singer Concert Hall in Calgary. In fact, he sold it out more quickly than anyone else in its history except Sarah McLachlan. I doubt Gladwell has the same sense of pitch as McLachlan, but he was certainly treated like a rock star tonight.

Gladwell is the Canadian-born author of The Tipping Point (2000), Blink (2005), Outliers (2008), and What the Dog Saw: And Other Adventures (2009). He’s a sort of public intellectual, a thinker and writer on topics of current and historical significance. This evening he spoke about what he calls “miscalibration,” the idea that so-called “experts” can possess overconfidence that leads them to make mistakes, and that because of their roles as leaders these mistake can have tragic consequences. I would attempt to explain this further but frankly would just screw it up: my pants are not nearly as smart as his.

Gladwell illustrated his point by recalling an American Civil War battle, weaving in stories about the 1929 stock market crash and the recent financial crisis. He even threw in the results of a psychology study for the academics in the crowd. I could go on and on about Gladwell’s seemingly endless knowledge, but instead would like to comment on my overriding impression of the evening: Gladwell’s skill as a storyteller. With an almost boyish charm, Gladwell led the audience effortlessly back and forth between the 1863 Battle of Chancellorsville and the events leading up to the 2008 financial meltdown. One of the only Canadians who possesses similar storytelling skill is CBC’s Stewart McLean, but Gladwell is neither as wholesome nor as accessible. Frankly, I like that about him. 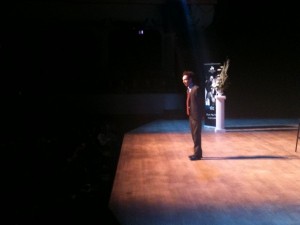 And now for my thoughts:

For me, Malcolm Gladwell was always a name that made my head start nodding whenever I heard it mentioned. Had I heard of him?Â No. But I knew enough to know that I should at least pretend that I did.Â  So when tickets ended up in my hand to see him speak I figured, “I’m taping American Idol anyway…I might has well go.” We got to the theatre rather late, but thanks to general admission ticketing and people’s apparent fear of sitting too close I almost ended up sharing the stage with Malcolm. Having fallen asleep in many a college lecture I knew this was probably a bad idea.

But here’s the thing: I didn’t fall asleep.Â I didn’t even want to–and I always want to sleep. When Gladwell told us he was going to spend the next forty-five minutes talking about the financial crisis and American history I almost stood up to leave, but my friend insisted that I stay.Â I’m glad I did: Gladwell is a master of the written word, but it’s extremely rare that someone who spends so much time in front of a computer can also captivate a room.Â Gladwell uses his mix of intelligence, sense of humor, and, yes, Canadianness to quickly become everyone’s really smart friend.Â Drama kings and queens might say their lives were changed by the lecture. It wasn’t life-altering–I doubt someone can have that much of an effect on your life in so little time–but it was interesting and fun and that was kinda unexpected.

Okay, so I didn’t always know what he was talking about–but really, how often does someone really understand 100% of a lecture?Â I think everyone pretends like they do, but when you get a good view of a thousand people all at once it’s pretty easy to see that everyone, at least sometimes, simply nods. 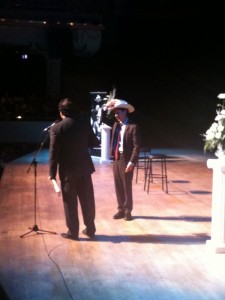 At the end of the night Mayor Nenshi arrived on stage to White Hat our guest. In a moment that was sure to be scrutinized on every hipster blog within a hundred kilometers, Gladwell seemed unsure about the whole process but happily went along with it. Turns out Malcolm and I aren’t that different after all!