Look what I won!

>I have another confession. Politics have always confused me. I blame YTV. Regardless of who I blame I’ve often kept this secret from some of best friends who seem to be drawn to politics like I’m drawn to buying DVDs and never watching them. This past weekend something quite big happened for one of our biggest parties The Liberal Party. But because I’m not too sure of what happened I was further confused upon viewing this picture…. 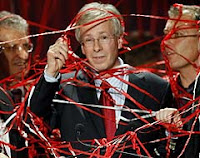 Upon viewing this picture several things came to mind. This guy’s is Celine Dion’s brother right? Well like where the hell is she? Shouldn’t she be supporting him. Cheering him on? I know if I won whatever this guy won (parade marshall) my sister would be there, singing the hell out of that Titantic song. Also this man looks like distressed. Are they tying him down with pretty christmas ribbon? Granted the american government has always been sexier then ours, but do we really need this? I think this is way too kinky. And look how happy the guy to his left his?Like his plan is finally coming into action. Maybe he to is kinky. He probably bought the ribbon. Sick bastard.

So thats what I know about his guy . I can only hope that someone helped him out of this ribbon, I also hope that he is not under my tree for christmas.