Vancouver is so freaking lucky.

First they have the Olympics and now they have zombies.

I should clarify.
It was announced this morning that one of my favourite musicals, Evil Dead: The musical will be opening up in Vancouver on October 20th! The Canadian production, which has seen runs in Toronto, NYC and Calgary, will have it’s run at the Vogue Theatre on Granville Street.

Also, there are apparently two productions of the show going on at the same time! My recommendation is to see the GZT with H&M and KEYSTONE show , because they are using the same set that was used in the other cities and it’s a spectacle that unfortunately I don’t think community theatre will be able to replicate.
If you are a Vancouverite and you are looking to lose your musical virginity, THIS is the show to see. Especially in the blood splatter zone. Just ask this lady: 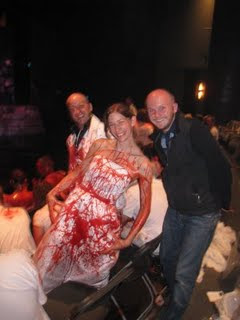 Yes, that is her wedding dress.

I’ve already seen the show three times, (twice in Calgary, once in Toronto), and I can’t sell this show enough. You won’t have a more enjoyable time, even if you’ve never seen the Evil Dead movies.

Tickets go on sale this Wednesday!!!!

Now about those Olympics….