Look out for Dexter. 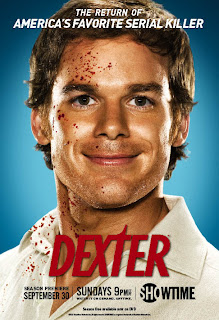 Have you ever heard of that show Dexter?

Have you ever seen it?
If you answered “No” to either of these questions, than you are in luck!
That’s right! Â Thanks to the writers strike, CBS has ran out of shows to air and will start showing the first season of the killer drama Dexter, which normally airs on the pay-for-cable Showtime.
I’ve heard such amazing things about this show and I can’t wait till mid-February when CBS starts airing “safe for network TV” episodes of the show. Â I say that because the show, which I think is about a detective who hunts down serial killers who is also a serial killer, probably isn’t the most family friendly of shows. Â But for a network that airs 3 different CSIs, Without a Trace, Criminal Minds and Cold Case, I’m sure Dexter will fit right in.
The show has been nominated and won quite a few Golden Globes, SAG and Emmy awards so while my mom probably won’t be watching, I certainly will be.